The Tale of Bin Mugarab 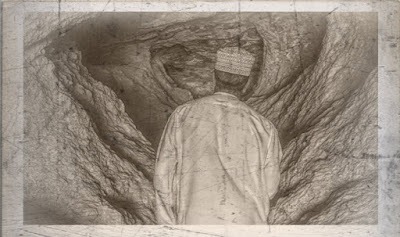 It was recounted that Bin Mugarab’s tribe had lived in a village by a creek (falaj) in Al-Ihsa region in Saudi Arabia. A heated dispute arose between the dignitaries of the tribe and Bin Mugarab’s father, who died in mysterious circumstances (1). Bin Mugarab swore by God to take his revenge on them in return for his father’s strange death or for some other sound reason that only he could know.

He began to build an imposing mud-and-stone palace with an external kitchen, but founded on salt. When he had finished it, he invited all sheikhs and the other socialites of his village to come to a traditional rich feast that he was giving, also pretending that he highly respected them. He treated them very gently to convince them of his high opinion of them, so they would not distrust him and reject his invitation. They accepted his invitation, and in a few days, they started to arrive at his party.

He hired a doorkeeper and ordered him not to allow any of the guests to leave the palace (2). It was said that during the preparation of the lunch a Bedouin passer-by saw people entering the palace. He asked the doorkeeper about the reason for their coming. “Was it because of an invitation, Brother? What do you have inside?” inquired the Bedouin. “O Bedouin, Entrance, Entrance, No Exit,” replied the doorkeeper.

The Bedouin was suspicious about the matter. “Could I enter?” asked the Bedouin. “Entrance, Entrance, No Exit,” The doorkeeper reiterated.

The Bedouin understood that it was possible to enter, but it was not possible to leave. To make certain, the Bedouin enquired, “What time is the feast?”

“Don’t scoop twice,” the doorkeeper said. The Bedouin took some food from the cooks, and went away.

Bin Mugarab requested the common villagers to change the direction of the creek towards his palace to show his guests his hospitality in its best manifestation. They indeed did so.

The servants started bringing the food in and setting the dining wares. When they had ﬁnished, he called the sheikhs and the other leading ﬁgures of the village to help themselves. As they engaged wholly in eating food, Bin Mugarab turned the water into the salty foundations of the palace. The doorkeeper locked the door in order not to allow anyone to leave. The palace fell down upon them, and they all died. After that Bin Mugarab realized that to stay in the village would be impossible, and that he would be murdered especially by the eminent men of the village, who did not attend the feast in revenge of what he had committed. Therefore, he decided to ﬂee.

Together with his daughter, his servant, and his she-camel, he left the village stealthily for Oman in search of a safe haven. It took him several months to cross the desert before reaching his destination. He looked for the safest place and trusting people to settle in with. It was Summer when Bin Mugarab entered Oman through Al-Dhahra region, and moved eastward from one village to another until he reached Al-Dakhiliya region (3). He continued moving eastward from village to village, and passed through Wadi Bani Rawaha. He intended to go to Samail, and to have a siesta under the wadi shady trees by Wabal. (4)

“What’s the name of this village?” Bin Mugarab asked his guide.

“What’s the name of the other village ahead?” asked Bin Mugarab.

“Saija, but it is far,” replied the guide.

“What’s the name of the village we left behind,” asked Bin Mugarab.

“We’ll go back to it and spend the night there,” said Bin Mugarab.

“This is a nice place. Why will we go back there?” said the guide.

They went back to Wisad to spend the night there. Then Bin Mugarab moved in the morning eastward to Samail. He did not like it. Therefore, he moved on to Wadi Al-Tayyin. He continued his journey eastward. He crossed the mountains between Tayyin and Quriyat, and when he reached Tiwi, he was alone on his she-camel.

On his journey eastward, it was narrated that his daughter was riding the she-camel, when the latter tried to wade across the wadi to the other side. Suddenly, the she-camel stopped for some reason. His daughter shouted at it to wade on and called it, “O daughter of wadi-wader.” Bin Mugarab raised doubts about what she said. He began to fixate on what she had said. He did not understand the meaning of her words, and wondered for what reason she had uttered them. What was her intent? Satan whispered evil to him to kill her, and without hesitation he did, and buried her there. Afterwards alongside with his servant he went on. Then an argument occurred between him and his servant, resulting in the latter’s death.

Bin Mugarab left his she-camel grazing and went to Tiwi Suq to buy some necessities. Then he suddenly caught sight of a man driving his she-camel from one clover farm into another.

“Why did you drive the she-camel from that clover farm into this one,” He asked the man.

“This strange she-camel was in my neighbour’s farm, and I brought it into mine because the neighbour has to be protected by the right of neighbourhood,” answered the man.

“Do you protect those who live 1n your neighbourhood and your guests?” asked Bin Mugarab.

“Yes, we do. We protect our neighbours, give the refuge-seeker shelter and refuge, highly honour strangers, and everyone who lives with us is one of us,” replied the man.

“What’s the name of this village,” asked Bin Mugarab.

Bin Mugarab resolved to stay at this village. He invested all his money in trade, and became one of the most affluent and inﬂuential people of the village. He had his own palaces, farms, real estates, servants, attendants and retinue. But for all those years, he was haunted by the memory of what he had done and by the fear of being found out and killed in revenge for it. He lived in extremes. On the one hand, he was quite sure his avenger would never reach him while he was alive for, he had more people, more money and more inﬂuence than they, but on the other hand, he had misgivings that they would certainly come. Because he eventually became old, he decided that when he would die, he would be entombed in an unreachable cave inaccessibly located on a mountainside. Therefore, he built a stone ﬂight of steps from the foot of the mountain up to the cave, and laid a small gold piece under every step. Then he dug a grave inside that cave to be laid to rest in when deceased. He also ordered his servants and suite to bury him in that grave, and to demolish the ﬂight of steps and take the gold pieces as a reward, once ﬁnally expired.

Bin Mugarab fully adhered to this idea, believing that if he died and his old people happened to come to Tiwi in search of him, and found that he was already dead, they would probably disinter his corpse and mutilate it. Thus, the cave was inaccessible and they could not reach him at all. He also took several other measures, among which were that he showered the notable men of the village, his servants and cortege with money, and expanded the circle of his friends, as well, to ensure his inhumation after his death.

One day, Bin Mugarab pretended that he was dead. But his servants did not honour his wishes and resolved not to carry his cofﬁn up to the cave and inter him in the grave that he had dug for himself. They made a decision to bury him anywhere, instead. They rushed towards the flight of steps and set about destroying it, taking the gold pieces. Bin Mugarab heard what they agreed on. When they all left for the ﬂight of steps, he rose to his feet and followed them. He saw everything with his own eyes. He rebuked them. They felt ashamed of themselves and of what they had done, and swore by God and all the righteous people that they would live up to their promise. Bin Mugarab was fully sure that he would be laid to rest in his grave in the cave.

Bin Mugarab died, and his servants really were true to their word this time. They carried out his order perfectly. They carried his cofﬁn up to the cave, entombed him in his grave, entirely demolished the ﬂight of steps, and took the gold preces.

Meanwhile, his old people had been looking for him everywhere to avenge themselves on him. They left Al-Ihsa for Oman and travelled along the same road that he had taken when he ﬂed his village. They asked about him at every village they entered, and received the same answer that he had gone to the village so-and-so until they ﬁnally arrived at Tiwi. There the people knew that some people would sooner or later come and ask about Bin Mugarab. So, when they were asked about him, they answered that he was buried in that cave.

His old people pledged to track him down no matter where, and swore by God that they would cut him into pieces, if they found him alive. But if they found him dead, they would exhume his body, dismember it and pulverize his bones to dust with the hooves of their horses. When they looked at the cave, and double-checked with the villagers, they made certain that his tomb was there, but it was unreachable. They rode their horses up the mountain to the top. There they got off, bound some horses and lowered them into the cave so that they would tread on Bin Mugarab’s grave and die there in the cave.

(1)     There were some speculations that the quarrel was between the tribe’s luminaries and Bin Mugarab himself. Bin Mugarab means in Arabic son of the experienced. Translator

(3)    It was called Interior Oman at that time. Translator

(4)    Wabal is a village in Oman. It was the name of the village at whose wadi Bin Mugarab decided to take siesta. Later on, His Majesty Sultan Qaboos renamed it as Manal. Translator