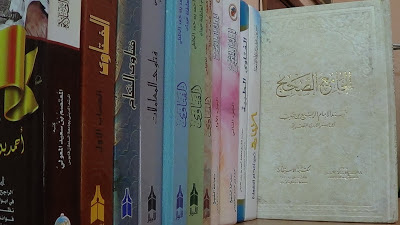 "Know that all what is in this honorable Musnad (compilation of hadith) was narrated by Al-Rabii from his teachers. And that Al-Rabii had about 25 teachers. He took narrations from all of them. He had narrated most from Dhummam [ibn Al-Sa'eb Al-Basri Al-Omani] from Jabir, then from Abu 'Ubaidah [Muslim ibn Abi Karima Al-Tamimi], then from Abi Noah [Salih ibn Noah Al-Duhhan Al-Basri Al-Omani], and then the rest of the teachers. His narration from Dhummam was carefully compiled by Sheikh Abu Sufra Abdul Malik ibn Sufrah.  And that most of it is from the narration of Abu 'Ubaidah from Jabir ibn Zaid; which was one of Abu Ubaidah's teachers. And he (Abu Ubaidah) had many teachers. And he had narrated most from Suhar [Ibn Al-Abbas] Al-Ubdi. So what is in this Jami' (compilation) is his narrations from some of his teachers, but his narrations from other teachers are in another book."
Imam Abdullah Al-Salimi

Al-Rabii bin Habib Al-Farahidi wrote his prestigious compilation named "Al-Jami'i Al-Sahih" or "Musnad al-Rabii b. Habib" in the second century A.H. and it is still a reliable reference for Ibadhis in Hadith. It is regarded (according to Ibadhi Muslims) as the second authentic book of Islam after the Holy Qur'an .It ranks higher than the volume (Sahih) of Al Bukhari and Muslim, because it is tripartite in ascription.

The original version of the book composed by al-Rabi' b. Habib is not in common use. It is a "Musnad" because it is arranged according to the name of the narrators. The current version is that rearranged by Abu Ya'qub Yusuf b. Ibrahim Al-Warijlani entitled "Tartib al-Musnad". This latter copy contains additional narrations added by Abu Ya'qub.

The first two parts of the Musnad contain Traditions on legal and religious matters, arranged in books (kutub, the plural of kitab) with chapters (abwab, its singular is bab). They were classified according to subject matters on Fiqh.
The Isnad (chain of authorities) of the two first parts is as follows:
Al-Rabi' b. Habib Abu 'Ubaidah - Jabir b. Zaid a Companion - the Prophet (PBUH). The Companions are mainly: Ibn 'Abbas, Abu Hurairah, Abu Sa'id al-Khudri, Anas b. Malik, A'ishah and others.
There are also Traditions through the following Isnads:
(a) Al-Rabi’ - Abu Aiyub al-'Ansari - the Prophet (PBUH);
(b) Al-Rabi’ - 'Ubadah b. al-Samit - the Prophet (PBUH), and
(c) Al-Rabi’ - Ibn Mas'ud - the Prophet (PBUH).
The number of traditions in the first two parts are 742 of mutasil hadiths (i.e. all narrators are mentioned in their respective places from the Prophet (PBUH) to the compiler of the Hadith book) with tripartite in ascription called "Silsilat Al-Thahab" or "The Golden Chain of Narrators".

The additional narrations added by Abu Ya'qub occupy parts three and four of the current editions and contain the narrations from al-Rabi' on theological questions, all of which are included in part three. In part four, there are the narrations of Abu Sufyan Mahbub b. al-Rahil from al-Rabi', narrations of Imam 'Abd al-Wahhab b. 'Abd al-Rahman b. Rustam from Abu Ghanim Bishr b. Ghanim al-Khurasani, and the marasil of Jabir b. Zaid. In these marasil, the authority for transmission between Jabir and the Prophet is not mentioned.
The number of the Traditions added by Abu Ya'qub in parts three and four are 263 including 82 traditions of marasil Jabir b. Zaid. Thus The Ibadhi collection with the additions of Abu Ya'qub contains 1005 Traditions.

"Know that this honorable Musnad (compilation of hadith) has the most authentic narrations (riwayah) and the highest chain of transmitters (isnad). And all of its narrators are famous with knowledge, devout, accuracy, honesty, integrity, and preservation. All of them are imams in religion and leaders of the rightly guided."
Imam Abdullah Al-Salimi