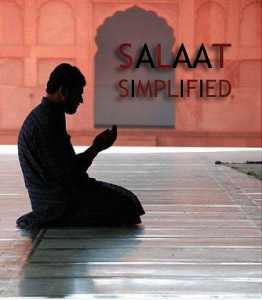 1.     A Muslim is required to perform daily obligatory Prayers (Salaat) ﬁve times as per the Prayer timings.

2.     This leaﬂet is meant to teach new Muslims how to perform their ﬁve daily Prayers.

5.     Once you are puriﬁed from physical and non-physical impurities (i.e. in a state of Tahaara), you still need to perform Ablution (Wudhuu) in order to perform Prayer. See the section on Wudhuu for step-by-step instructions on how to perform Wudhuu.

6.     Once you have Wudhuu, you are now ready to perform Prayer. See the section on Prayer for step-by-step instructions on how to perform daily Prayers.

HOW TO PERFORM TAHAARA
Why Tahaara?
Allah commands Muslims to purify themselves from all types of impurities before performing certain acts of worship.
Tahaara in Islam is of two kinds:
1. Puriﬁcation of “physical impurity" that is caused when a person passes urine or stool (also called Hadath L-Asghar) or is in contact with impurity such as urine, stool, blood, vomit, puke, manee, madhee and wadee.
2. Puriﬁcation of "non-physical impurity” that is caused by sexual intercourse and wet dream (Janaaba), menstrual cycle (Heidh), post natal bleeding (Nifaas).
Allah (swt) says:
“Allah loves those who turn to Him constantly and He loves those who keep themselves pure and clean.” (Qur’an 2:222)
Prophet Muhammad (saw) said:
“Tahaara is the basis of Faith" (Sahih Muslim and Bukhari)

Niyyah (Intention)
In Islam, all deeds are considered by their intentions, thus before making an Tahaara one needs to make an intention in the heart to take away the state of impurity from your body, clothes, the place intended for performing prayer for Allah's sake.

Physical Impurities (Najasa)
‘Najasa’ is an Arabic term for all physical substances that Islam considers them as impurities that when in contact with the body, clothes or place where prayer is intended to be performed, must be removed ﬁrst before performing prayer (Salaat). Najasa include the following substances:
Ø Urine: whether from human or animals
Ø Stool: from human and animals except from animals that are eaten by humans
Ø Blood: all types of blood except blood from cutting ﬁsh or meat
Ø Vomit
Ø Puke: food or liquid that ﬂows back from the stomach into mouth
Ø Manee: liquid that comes out during sexual intercourse or wet dream
Ø Madhee: light clear liquid that comes out during sexual foreplay
Ø Wadee: light white liquid that comes out after urine

Removal of Najasa
Najasa on the body, clothes or place where prayer is intended to be performed, (or anything or anywhere for that matter) can be removed by simply washing off with water. It is not stipulated as to how many times it must be washed off, except in the case of the physical impurity of a dog (i.e. its saliva, urine and feces), where it must be washed seven times, one of which must be done with clean earth (sand or dust). For the rest of Najasa, they must be washed off with water only, and if some smell or stubborn stains remain after washing they may be ignored.

Non-Physical Impurities (Hadath L-Akbar)
‘Hadath L-Akbar' is an Arabic term that refers to the state of non-physical impurity (intangible uncleaness) that prevents a Muslim from offering prayers and other acts of worship until that state is removed. Hadath L-Akbar includes the following three states:
Ø State of ‘Janaaba’- After a sexual intercourse or after semen emission whether the person is awake or asleep (wet dream)
Ø State of ‘Heidh’- After the woman's menstrual cycle
Ø State of ‘Nifaas' - After a period of woman's post natal bleeding (usually 40 days)

Removal of Hadath L-Akbar
Purifying oneself from the state of Hadath L-Akbar can be achieved by ritual bathing (Ghusul) which involves pouring clean water to the entire body. Ghusul is performed in order to validate: Salaat, Tawaf, Fasting, Touching and Reading the Qur’an, and Entering a Mosque.
Ghusul is needed in the following situations:
Ø After sexual intercourse or after semen  emission whether the person is awake or  asleep (wet dream)
Ø After woman’s menstrual cycle
Ø After period of woman’s post natal bleeding
Ø After a non-Muslim reverted to Islam
Ø When preparing a dead body of a Muslim for  funeral
Ø When suspect having ritual impurity
Ø Every Friday
Ø During the two Muslim Eids
Ø Before entering the state of ‘Ihram’ for Hajj or Umrah

How to Perform Ritual Bathing
Ø Make intention (Niyyah) in your heart
Ø Passing urine
Ø Wash the private parts (from the navel to the knees) and any area that come in contact with ritual impurity.
Ø Say Bismillah
Ø Perform Wudhuu as done for prayer (refer to the Wudhuu section)
Ø Application of water thoroughly to the entire body
·          Beginning with the upper parts of the  body before the lower parts
·          Beginning with the right parts of the body before the left parts
·          Rub the surface of the body with hand while applying water

HOW TO PERFORM WUDHUU
Why Wudhuu?
Performing Ablution (Wudhuu) before entering into prayer [Salaat) is commanded by Allah (swt) and His Prophet (saw).
Allah (swt) says:
"0 you who have believed, when you rise to [perform] Prayer, wash your faces and your forearms to the elbows and wipe over your heads and wash your feet to the ankles. And if you are in a state of janabah, then purify yourselves. But if you are ill or on a journey or one of you comes from the place of relieving himself or you have contacted women and do not ﬁnd water, then seek clean earth and wipe over your faces and hands with it. Allah does not intend to make difﬁculty for you, but He intends to purify you and complete His favor upon you that you may be grateful.” [Qur’an 5:6]
Prophet Muhammad (saw) said:
“No Prayer is valid of whoever neglects Ablution.” [Sahib Bukhari and Sahih Muslim]

Niyyah (Intention)
In Islam, all deeds are considered by their intentions, thus before making an Ablution one needs to make an intention in the heart to take away the state of impurity from your body by performing Ablution for Allah's sake.

Before start making the Ablution, say:
“بسم الله”
“Bismillah”
Step 1
Wash both hands up to the wrists three times. Make sure the water reaches all parts of the wrist, including between the ﬁngers.

Step 2
Using your right hand, put a handful of water into your mouth and rinse it thoroughly and gurgle in as deep as possible. Do this three times.

Step 3
Again using the right hand, sniff water into your nostrils as far in as possible to clean them. Wipe any mucus away with the left hand, again three times.

Step 4
Using both hands, wash face three times, wiping from your forehead to your chin and extending your hands to cover your face from ear to ear.

Step 5
Wash your arm including the elbow three times starting with your right arm.

Step 6
Wash the left arm including the elbow three times, as you have done for the right arm.

Step 7
Wipe the head with a wet hand once from the front to the back.

Step 8
Wipe the inside of your ears using your wet ﬁngers; at the same time wipe the back of the ear lobes with your thumbs.

Step 9
Wash the right foot including the ankle three times, passing water between the toes, and over the sole of the foot.

Step 10
Wash the left foot including the ankle three times, passing water between the toes and over the sole of the foot.

Actions that Nullify Wudhuu
1.     An excretion of the private parts (urine, feces, gas and prostatic ﬂuids).
2.   Sleep that removes consciousness.
3.     Loss of consciousness for any reason.
4.     To be in contact with the sexual organ or any other ritual impurity.
5.     Bleeding, vomiting and puking.

Tayammum
·   Tayammum (Dry Ablution) refers to the use of clean earth (sand or dust) to wipe out one’s face and hands in place of Ablution or puriﬁcation of minor and major ritual impurities with the intention of preparing oneself to pray.
·     Tayammum is permitted in the Qur'an when one cannot ﬁnd water. [Qur'an 4:43]
·   When performing Tayammum, one must begin with intention (Niyyah), then mention “Bismillah”, and ﬁnally strike clean soil with hands and wipe the face and hands up to the wrist.

HOW TO PERFORM SALAAT
Why Salaat?
Performing regular obligatory Prayers is the second pillar of Islam and has been commanded by Allah (swt) and His Prophet (saw).
Allah (swt) says:
“Recite, [O Muhammad], what has been revealed to you of the Book and establish Prayer. Indeed, Prayer prohibits immorality and wrongdoing, and the remembrance of Allah is greater. And Allah knows that which you do.” [Qur’an 29:45]
Prophet Muhammad (saw) said:
"Whoever doesn't pray is not a Believer.”
“What lies between a Believer and disbelief is renouncement of Prayer.”
[Sahih Bukhari and Sahih Muslim]

Niyyah (Intention)
In Islam, all deeds are considered by their intentions, thus before entering state of Prayer one needs to make an intention in the heart the desire to pray in obedience to Allah (swt)
To perform Prayer, stand on a clean place facing the direction of Qibla ready to begin. 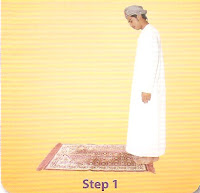 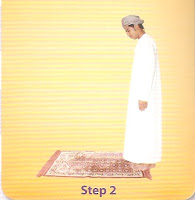 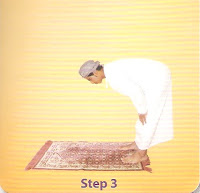 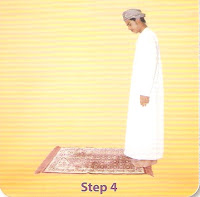 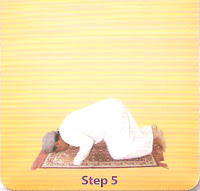 Step 6: Sitting (Juluus)
Stay silently in this position for 3-4 seconds 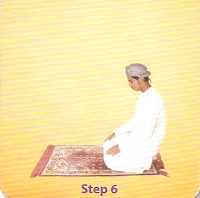 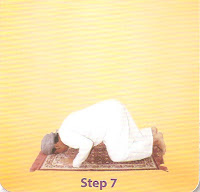 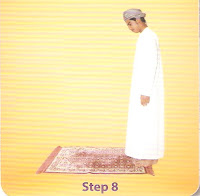 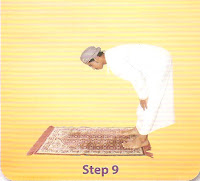 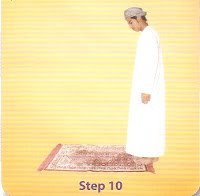 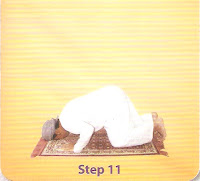 Step 12: Sitting (Juluus)
Stay silently in this position for 3-4 seconds 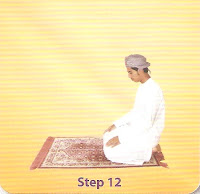 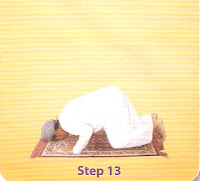 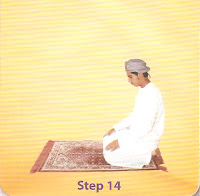 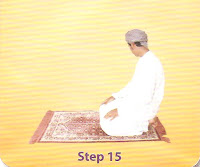 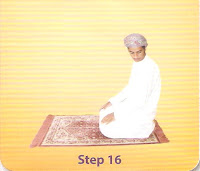 May continue supplications in your own language

Actions that Invalidate Prayer
1. Eating or drinking in Prayer.
2. Speaking about something unrelated to Prayer.
3. Smiling and laughing during Prayer.
4. Leaving out essential act or condition of Prayer such as ablution.
5. Making many unrelated motions.

For more information refer to relevant books on Prayer.